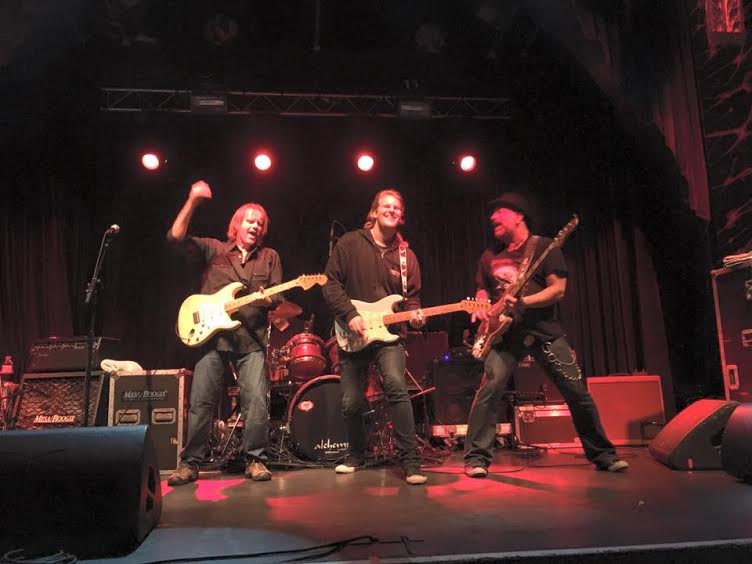 The United Kingdom is one of the many places in the world where the arrival in any town of the country of Walter Trout and his Band always feels like the arrival of a Blues Shaman and his tribe.

Many things have been said about Trout and his miraculous return on stage, following the liver transplant that saved Trout's life. Throughout his absence from the music scene, people has never stopped loving the American Guitarist and supported him when it really mattered. Through this Tour, supporting his new album Battle Scars, Trout is playing with his heart and soul even more than the normal, because deep inside he feels that he owes part of his personal and artistic re-birth to his fans.

Frome in UK is the last night of the UK Tour and tonight, once again, a packed house is in anxious wait of one of their most favourite Blues Heroes. His arrival on stage, at 21.25 is welcomed with a gigantic roar from the crowd, with a good 3-minutes standing ovation, even before Trout touches his guitar.

Trout and his boys look in phenomenal shape and sound even better. The openers Help Me and I'm Back are powerful and thundering and Trout's attack on the vocals of I'm Back leaves no doubts about the fact that he is REALLY back. The Huntingdon Beach-based artist waste no time in touching the blues chords of his fans' souls, by executing an excellent version of Say Goodbye To The Blues from one of his best record ever, in my personal opinion, the 1990's Prisoner Of A Dream album.

The show runs fluidly as a steam train on full throttle. When Trout starts playing the tracks from his new album, he jokingly describes the moment as "the depressive part of the show". The songs, all related to the time Trout was in hospital, desperately waiting for a liver donor and hanging on to life by the skin of his teeth, may exude darkness through the lyrics but not certainly through their sound. Omaha and I'm Almost Gone have got a robust, solid rock tempo, but it's on My Ship Came In that Trout and his band offer one of the most intense moments of the evening. It's Trout vintage through and through, with a fantastic guitar solo that throws chills down the spine of the fans.

Trout's Band, once again, proves they are one of the finest music machine around and by Trout's own admission "it feels like we are playing like kids again". Sammy Avila often duets beautifully with his unique, dissonant style on keys with Trout's guitar, especially on the above mentioned My Ship Came In. Michael Leisure on drums is precise and powerful, Johnny Griparic on bass is solid and consistant. They are certainly the ideal band for any bluesmen in the world.

It's great to see as well that Walter Trout's legacy, when it comes to playing guitar and singing, will be around for a very long time through his sons. Jon, Walter's oldest, has been following his father on this tour and appears as Special Guest on a couple of tunes tonight with stunning results. Trout even decides to play, for the very first time, a song from the new album very close to his heart, called Please Take Me Home. The song is about Trout feeling his life running away from him, imploring his wife Marie to take him back home, while Marie surrounds him in her arms, giving him comfort and strength. A very deep, emotional moment of the show.

Trout leaves the fireworks for the very end, by playing what he calls his "one hit wonder, the only time I was in the charts, back in 1991 with Madonna and some others". The Love That We Once Knew indeed projected, at the time, the american artist right to the top of the charts worldwide and tonight's performance of this rock ballad is tender and strong at the same time.

Freddie King's classic I'm Goin' Down lifts up the whole venue and I cannot think of a better way to close a show. The Walter Trout Band is gunblazing the crowd through their rip-roaring rendition of this tune and even the Special Guests, including Stephen Dale Petit (which opened the show as Support Act) plus their Tour Manager and Rock Partner In Crime every time they are touring the UK, Andrew Elt, join on stage. Eight minutes of pure, raw, energetic blues-rock, with Trout's guitar fending the night with his fabulous solos whilst each musician on stage (including an outstanding high-pitched-Zeppelinesque one from Elt) sings the chorus.

When I met Trout, back in June 2015 at the Royal Albert Hall in London, I saw an artist that was timorous about his future. Tonight, I have seen an artist flying again and this time, higher than the sky. Once again, welcome back, Walter Trout

The Walter Trout Band is currently on Tour, you will find all the upcoming events by following this Link