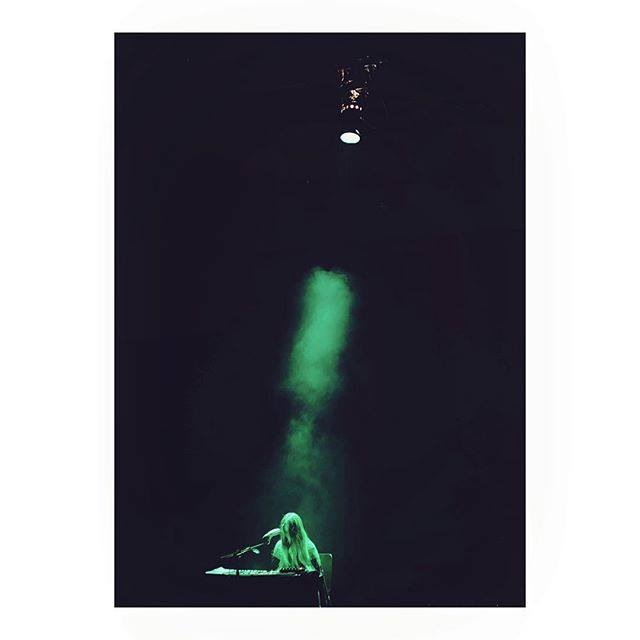 I have been waiting to see Anna Von Hausswolff live for a very long time. Her new album, the recently released The Miraculous, has been on constant airplay on Bluebird Reviews' hi-fi in recent times.

The Oslo club in Hackney, London, is not just a superb eatery place but also an excellent, intimate music venue and the perfect environment for tonight's show by Anna Von Hausswolff and her superb avant-garde music style.

When the Swedish young prodigy arrives on stage, it is very clear from the first note that this will be a very special night of music to remember. Von Hausswolff's band is made by two guitarists, a drummer and a keyboardist and she carefully places them around her on stage, almost to create the perfect quadriphonic sound frame.

Von Hausswolff is currently touring Europe to promote her new album and, By Jove, how well she does so! If anyone might have been mesmerised by the exceptional quality of her voice and the infinite talent as multi-instrumentalist on record, Von Hausswolff goes two notches further when she plays live, tonight.

Her voice dazzles throughout the show in various forms. From the low, almost baritonal style she uses on The Hope Only Of Empty Men to the dissonant singing mode used in Pomperipossa, resembling the sound of a mermaid, singing her pain from the deepest abysses in the sea. Von Hausswolff gives so much intensity to this live performance like very few artists I have seen for a very long time. She means every note and every word and she never gives for grant that audiences may understand or appreciate the personal music journey this extraordinary artist has embarked.

So much so that, when she receives the first of many triumphant roars from the crowd on the track called Discovery, Von Hausswolff is pleasantly taken by surprise by the crowd's reaction. All she manages to say is, in her own sweet and shy way, "This is unbelievable, you are fu***ng amazing!".

The Swedish artist creates, through her music, unique sonic carpets, able to transport the crowd in different times and spaces. What is really stunning, it is that the audience remains silent throughout each of the songs, to allow and appreciate even more Von Hausswolff's magnitude of music expression.

The finale is thunderous and incredibly emotive. Come Wander With Me/Deliverance is a 10-minute plus suite that goes through an irresistible crescendo, allowing Von Hausswolff and her band to write in a very special way and in cubical letters the words "The End" to an incredible show. The crowd wants some more and Von Hausswolff, gracefully, returns on stage to play, as encore, Mountain Crave, from her previous album Ceremony. Von Hausswolff thanks sweetly the audience by saying "I feel exhausted but you were so unbelievable to me, thank you so much!".

She may be seen, sometimes, by the media, like an unreachable, talented, beautiful star coming from a different music universe. Anna Von Hausswolff has clearly stated tonight, through this show, that she belongs to music royalty.

The sky of London, tonight, after the Swedish Star passage, for one night only, seems a bit more shinier. Thanks to Anna Von Hausswolff.