It's no wonder why, despite the deep crisis of the music business and the constant struggling for many music genres to survive in such a troubled artistic world, the Blues keeps on going against all odds. This is not just something related to the United States, where historically there has always been a strong, countrywide legacy between musicians and this genre that has allowed (and still going) the Blues baton to be carried for several generations but also to many more parts of the world.

Europe, for instance, in the last 50-odd years, has gifted this ultra-centenary genre with some incredible artists like Rory Gallagher, John Mayall, Peter Green, Alexis Korner, Jeff Beck and Eric Clapton, just to mention few of them. There are numerous Blues associations around the world doing a magnificent job by keep on spreading the word of Blues to old and new fans but very few do so as well as the European Blues Union. In the last 7 years (including this), the EBU has felt increasingly the need to create a chain around the whole of Europe between musicians, a new breed of artists that would be carrying the Blues message to the next generations.

The latter was the leit motiv that inspired the EBU, back in 2011, to start a competition called European Blues Challenge among artists coming from several part of the European continent. The notoriety of such challenge has, year after year, reached such popularity that more and more countries in Europe requested to take part in the competition, so much so that this year the European Blues Challenge has opened its door to the considerable amount of 21 different countries.

This year, the nation hosting the event was Denmark and the EBU had certainly well chosen the perfect location for it through that charming city that is Horsens. The 2017 European Blues Challenge has seen several dozens of volunteers plus the local representatives of the EBU joining forces together in a remarkable organisational effort that has made these three days of Blues music being particularly memorable for Fans, Press and Artists altogether.

The opening night, which was purely a welcoming warm-up evening with no competition involved, couldn't kick-off the musical kermesse any better. Without any doubts, the headliner of the evening, Thorbjorn Risager & The Black Tornado stole the entire evening through a magnificent show, in which the Danish artist and his band performed some of their most famous hits plus songs from their brand new album Change My Game.

When the Challenge then started on the following days, it was quickly clear that it was going to be a difficult decision to take for the jury involved in the competition to select who the winners were going to be. In the end, the main price went to the excellent Kaz Hawkins Band from the United Kingdom but there was so much quality in this year's Challenge.

There have been, overall, truly outstanding performances from all the artists performing in Horsens. We like to remember, in particular, the originality and the emotional impact created by bands like Rolin Humes from Croatia, Bayou Moonshiners from Italy and The Cornfeds from Denmark plus the fabulous wall of sound created by artists like The BluesBones from Belgium (which have been awarded with the second place in the Challenge), Daniel Eriksen from Norway, Gaelle Buswel Band from France and the boom-bastic mouth-drumming sound of Chris Kramer & Beatbox'n' Blues from Germany. 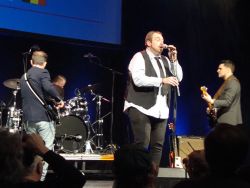 The whole event has been a complete success for the EBU and has proven, once again, through the warm and friendly atmosphere of the Blues community that what political and economies differences may sometimes separate between countries, the music, in particular Blues music in this instance, happily unites.