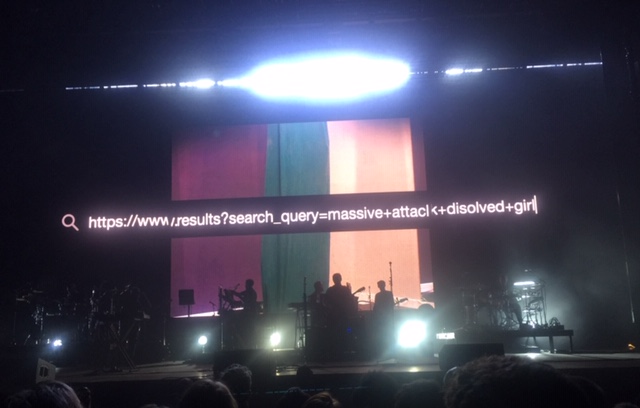 Tonight's Tour Date in London, at the O2 Arena, was certainly one of the biggest nights of the Mezzanine XX1 Tour for the band, not only just for the venue's capacity (20.000) but also because London is and has always been, since Massive Attack's early days as a collective, a place that has enormously supported the British group in a very enthusiastic way.

Despite few crowd control issues that the venue had to face, possibly due to the fact that the Arena was packed to its core, something that might have possibly delayed the starting time of the show too, when at 21.15 the band walks on stage, covered by a cloud of smoke and in complete darkness, with the sole luminous mega-screens injecting random slogans, an impressively loud roar erupts from the whole Arena, announcing that the show is due to start.

The 95 minutes that will follow that roar are a complete assault to the senses, from a lyrical, musical and visual perspective. This is a true show in every sense of the word. Film maker Adam Curtis, who has collaborated with the band on the Tour’s visual aspect, makes a superb job in creating a fascinating montage that would mirror the original plan of the band in wanting to bring onstage a visual soundtrack of their music that would show all that the world went through since the release of Mezzanine, from a political and a sociological aspect, not taking any prisoners about the way of showing the consequences of what both true and fake reality have done to modern society, a dualism that is constantly confusing the world and its inhabitants.

From a musical perspective, while some may think that, sound-wise, the band members have moved perhaps too far from the definition of their pioneering Trip-Hop style, Massive Attack have, in our opinion, marvelously grown up instead as artists as their music have, bringing their original music formula to a more Alt-Trip-Techno-Hop of great sonic impact, thanks to the lysergic musical alchemy that Robert Del Naja is able to create on keyboards and computer programming with Grant "Daddy G" Marshall's powerful vocal imprint.

The whole line-up of musicians constantly on stage, which counts 6 elements plus Del Naja, is technically impeccable in every minute detail on every execution, as you would expect by true perfectionists like Massive Attack. This Tour is also bringing a fabulous extra element of entertainment, by having two very special Guest Star Vocalists like Horace Andy and Cocteau Twins' muse Liz Fraser, both in stratospheric vocal form, especially in their performances of Angel and Man Next Door (Horace Andy) and Teardrop and the closing Group Four (Liz Fraser).

It's often funny, during the show, to observe the fans incredulity when Massive Attack play, in-between Mezzanine's setlist, some very interesting covers of several artists like The Cure (10:15 Saturday Night), Velvet Underground (the show's opener I Found A Reason) and Ultravox (Rockwrok), among others. When analyzing the choice of the covers selected by the British band, it is no coincidence that such songs have been purposely chosen for this Tour. Some of the lyrics included in the covers link perfectly with the concept of the Tour designed by Del Naja and Marshall together with Adam Curtis, about the way that the world has changed, since 1998, with people looking at their lives in a backward-looking way ("...And I'm crying...For yesterday....And the tap drips...It's always the same..." from 10.15 Saturday Night), with The Machines being able to access our datas and predict each and every move in our lives ("....Oh, I do believe, you are what you perceive. What comes is better than what came before" from I Found A Reason) and culminating, as a result, in a world confused and uncertain ("...Harder we're starved, wired and barbed. What a magnificent disgrace...." from Rockwrok).

Mezzanine XX1 is a spectacular, opulent, visually and sonically stimulating, charming, powerful and challenging Rock Opera. Something that you won't be able to see very often in nowadays' music scene.