On July 25th, I made the rainy drive to Hampton Beach filled with anticipation for the evening. Staind's Aaron Lewis was performing an acoustic show at the Hampton beach casino ballroom!

Picture this: Aaron walks on stage, sporting a black Hatebreed t-shirt, a camo baseball cap and jeans, takes his guitar and sits down on a stool. The setting reminded me of VH1 Storytellers, with a rug in the middle of the stage, a couple of stools, his cigarettes, a couple microphones and guitar cases and several Figi water bottles near by. This was perfect for the ballroom set-up. People were singing along, shouting out song requests with the comedic Aaron answering them back or singing a couple lines. 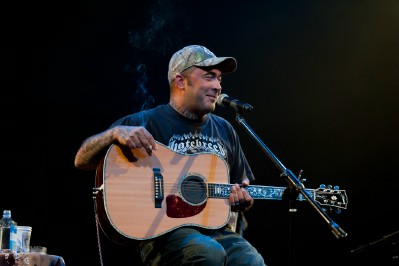 Thinking about what the show would be like, I assumed he was simply going to sing many songs off of his
new solo album, Town Line, and perhaps his new song, Country Boy. It's funny, but the thing about Aaron, is that he is one of the few songwriters who composes pieces that can crossover from rock to country with the simple change of an instrument. His instrument of choice is an acoustic guitar and his uncomplicated, simplistic yet powerful vocal ability, and that's more than enough to turn a simple piece of music into a work of musical art. The bare instrumentation and writing, combined with Aaron's one of kind vocals makes for a winning outcome. 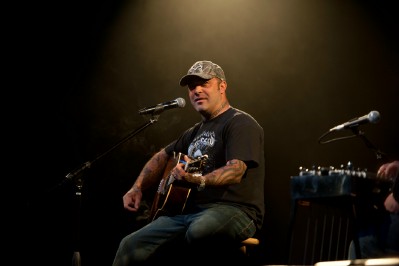 Ok, back to the night -- it was filled with a very light-hearted and open side of Aaron. He continuously cracked jokes, threw f-bombs, and opened up about details about his family life and how he grew up in the area. Few know that he lived on the streets in Hampton, NH. At 18, Aaron was homeless living on Hampton Beach, crashing on the sand and at friends' houses, and eating whatever he could find.

"I know all the trash cans with the best pizza," said Lewis.

In the years between living on the beach and performing at the beach, the front man and his band have sold more than 15 million albums and toured near and far. After a song or two, he had his busdriver, Ben Kitterman (Yes it's true, his bus driver!!), come out and play his acoustic dobro guitar to accompany him for the rest of the show. 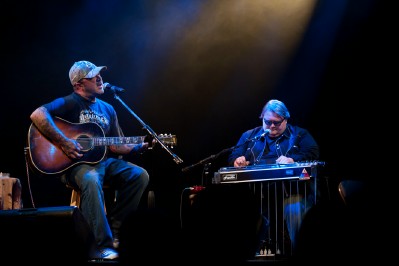 All in all, it was a great show with a two and a half hour set (straight, no intermission) which included MANY
cover songs, or clips of songs. He played parts of "Rainbow Connection," Cyndi Lauper's "Time after Time," Bruce Springsteen, Rick Springfield's "Jessie's Girl," and more.
For more photos by Micah Gummel, visit his website at :
http://www.nh-photographers.com/ConcertPhotography/Aaron-Lewis/18269266_xTWZbF#1405522573_DzLJgrj
Author Info
About
Recent Articles