Ray Mason at the Thirsty Mind 2011

We caught Ray Mason at the Thirsty Mind in South Hadley, MA, last night. He continues to be a great showman with original songs, funny stories, audience engagement and most importantly, master guitar work. People were smiling, laughing and some toes were tapping as Mr. Mason used his unique vocals with his signature mix of folk, rock and upside down blues themes. His history brings the love of music throughout the years, the Yardbirds, Dylan, Buffalo Springfield, and to me, he sounds like a brighter version of Neil Young with an uptempo guitar style. He has toured with NRBQ and currently plays in the band he's lead for 20 years, The Lonesome Brothers. 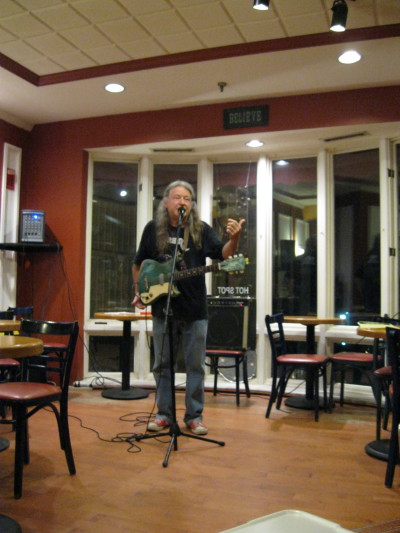 I asked Ray for his set list for tonight. He said he doesn't have one. He engages each audience differently and often plays requests if you know his music. So he carries with him what I would call a 'play list', which is a list of his solo songs that he can belt out at a moment's notice. He was kind enough to check off the songs he did tonight for me, as there were many, in the short two hour performance.

Some hightlights of his show were the stories of the Rockin Ramrods from Newton, MA, who had opened for the Kingsmen (Louie Louie) at Mountain Park years ago. They were the band that not only played well, but 'smelled good' when they walked by ! This spawned a funny discussion with the audience of 'English Leather' that got the crowd laughing. We were reminded that these days that old cologne may smell ok, but if you actually wear it, you may end up burning your skin. "Brightwood Blue Skies" followed with a great mix of guitar and vocals.

Ray treated us to a new song that he wrote about being 'locked' in your room, listening to records as a kid. It was called, 'Liner Notes'. It isn't published, but I wish I would've taped it, because the lyrics are the story of my life and I'm sure many others!

The last time I saw Ray he did a B-side of Sebastian Bach, the 1966 "Didn't Want to Have to Do It." and covered this well, yet again.

One of my favorite moments was 'Please Translate' from his album "It's Time To Captivate A Planet". This year, I've been following master guitarists from the likes of Joe Bonamassa and Luther Dickinson, Mr. Mason did a few brief blues slide licks and they stood out to underscore his experience with guitar styles.

I was able to talk with Ray a bit before the show, and mentioned "Wilson Road', an instrumental that he did the last time I saw him to honor Brian Wilson and put on the map a road in Northampton, Mass. You can't get more local than that! He does the song up tempo on an album with The Ray Mason Band, but solo he said he played it like a ballad. Tonight I just listened to the track and enjoyed it, but here is my video tape of it as he played it last year:

Ray made some music recommendations, NRBQ's "Scraps" featuring Terry Adams. He is always supporting his fellow musicians and seeking new connections across the genres and decades.

Catch his show if you can and stay for the whole set so you can chat with him about your favorite music. There is always something new to learn from Ray Mason, and the sound of the Silvertone stays fresh, forever rockin. 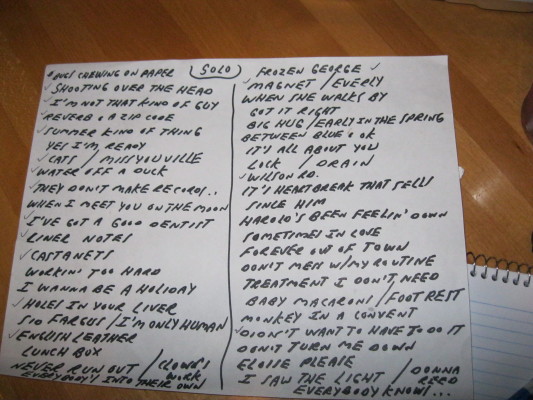