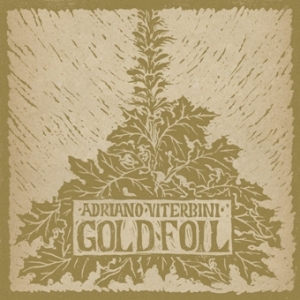 BR meets Italian guitarist and singer/songwriter Adriano Viterbini in a cold winter day in Rome, with the dusk just coming on the beautiful Roman Hills. Viterbini looks in great shape and ready to kick-off his mini USA Tour in January 2014 to promote Goldfoil, his first solo album just released in America too an album that is the guitarist's personal homage to the Delta Blues that he very much loves. 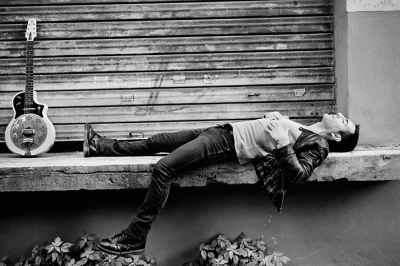 BR- Hi Adriano and thank you for being with us today at BlueBirdReviews. Goldfoil is an entirely instrumental record inspired by the Delta Blues tradition. Has this record been a project you had in mind for a long time?

AV - Thank you guys at Bluebird Reviews! The record has been almost a necessity for me, after so many years playing exclusively electric guitars. I needed to speak a much softer language through my guitars and this record has given me the chance to do so. Through my old vinyl collection, I rediscovered records that inspired me throughout all my formation both as a musician and a human being and I decided to create a record that I could stop in the timeline of my life. I did not decide to record Goldfoil to show my abilities as a guitar player but rather to do a homage to the melody, to create a delicate bridge from the past to the present of the blues, without any artefact and thanks to the collaboration on the record of Cortini from Nine Inch Nails, I believe I made it possible. The record is called Goldfoil due to the fact I used Goldfoil's pick-ups during the recording process, which are generally used for electric guitars but I thought they sounded rather very acoustic in this instance, therefore adaptable to the concept of the album.

BR- How did you decide the track list that ended up on Goldfoil?

AV - Well, tracks such as Vigilante Man and Stella South Medley take inspiration from the tradition of the Mississippi Blues and from artists such as Ry Cooder, which has always been one of my most favorite artists ever. The other part of the record has instead been inspired by listening to artists such as Jack Rose, John Fahey, which have not been necessarily famous worldwide but had this incredible ability, passion and emotion whilst playing guitar that remind me of African Music, one of my other great and recently discovered passions. By crossing the paths of the Delta Blues and the African Music, I manage to record new tracks such as Blue Man, which is a true mirror of the crossover between this two music styles, which are faraway but still so close to one another.

BR - Instinct and spontaneity to record new tracks or covers in your own way has always been a key element for you in recording any new record. Did you follow the same parameters this time around too when you recorded Goldfoil?

AV - The new album has been recorded in three days, so, in answer to your question, I followed indeed my instinct once again on Goldfoil. I wanted to record something that sounded like I felt in those three days, with the tracks already written but with the mood and the feeling I had during those recording days. I just wanted to do something that would photograph my intimate feeling and stopping them in time and space forever, with the pros and cons of improvising arrangements on the spot. I was living at that time a delicate period of my personal life and I just wanted to put so much sincerity in the record and to my fans...It felt like exposing a part of me through my music, a part that I never showed before to anybody. Let's say that when you play a rock show, somehow there are parts of the show that might cover your inner feelings, the light show, the fast tempo of the electric guitar etc. therefore you feel like you are almost wearing a mask. By playing acoustic guitar like that, there is no hiding, it is just you, your guitar and your most intimate emotions.

BR - How is important for you to be surrounded by a Team of Friends/Colleagues you can trust when you create a new record, either as a solo artist or when you record with the Bud Spencer Blues Explosion?

AV - Certainly very important for me. When you start a new journey, record a new chapter of your life, to have people you can rely on is a very important aspect. If you work with a Team that believe in you and the goal you want to achieve, it helps an awful lot to reach what you wanted to reach. Perhaps this has been the first time in my life as a musician in which I have been surrounded by people I could trust entirely and have helped undoubtedly to say what I wanted to say in this record. A great experience, professionally and personally speaking.

BR- In your brief American Tour you will visit New York and Memphis, which has got a very close relationship with the blues. Will the tour be strictly acoustic, respecting Goldfoil's record profile or will you surprise the crowds with electric numbers too?

AV - I have thought of taking with me a Dobro guitar with a pick up that allows to connect the guitar to amps for electric guitar; therefore I was hoping to reach some sort of hybrid sound, using this particular guitar and the electric amp as a bridge between acoustic and electric sounds, using a slight noise distortion. I thought of doing so also to give to the public in America a more exact idea of my music roots and the music styles I love the most.

BR- The record, although being an instrumental one, brings with some emotional feeling related to memories, a sort of journey through time and space. What kind of personal mood did you bring with you in the studio when you recorded Goldfoil?

AV - The record in my opinion has got a slight melancholy although a positive one for me because it reminds me of the beginning stage of my career; it's a sort of a Polaroid of my youth, that carries that type of strong emotions that things like the first time you are in love or care for somebody else may carry. This is that type of record that I am never tired to listen over and over again; generally I am sort of reluctant to listen to my previous records but this record is definitely a wonderful exception. It's that kind of record that doesn't speak loudly but brings with soft atmospheres that could be anybody's background music in a normal day or being the soundtrack of a road trip with friends; it's an aspect of this record that I strongly adore.

BR- In Vigilante Man, Woody Guthrie's track, when you have been asked to comment on this tune you mentioned "Let's not leave these songs locked somewhere". Has this track a special connection with yourself? Do you get the feeling that too often some music gems are left forgotten in the shelves of the music, worldwide?

AV - There are certainly some music genres which do not receive sufficient airplay or support in the airwaves' world, unless an artist doesn't use a bit of trickery and add a more "commercial" aspect to it in order to make it more popular. Unfortunately, who is not able to apply such trickery to their music because they want to keep it as pure as it has been conceived, unless get a bit of good fortune, end sadly too often in the shelves you were describing. Vigilante Man has a special meaning for me because reminds me of the Great Depression era, Steinbeck's books and all those very important values in life that in the modern music era are too often ignored by the younger generations, which consider those music values not very "hip" and trendy for this modern age. 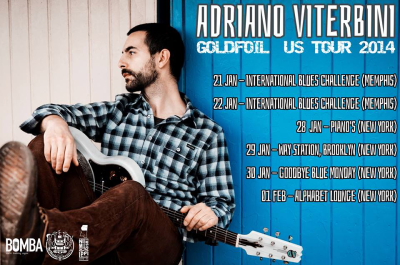 BR - Adriano, your USA Tour certainly will be the best test for an album like Goldfoil, given the great passion for this type of music in USA. Why do you reckon the blues struggles so much to find a proper, deserved niche in Italy commercially speaking, despite many Italians seem to love the genre?

AV - I don't think that blues in general struggles to find its place in Italy, is simply a matter of numbers; in USA, blues is a part of the music DNA of the country and in America is considered a real value because part of their background. We have our blues traditions in Italy and I am proud to feel in my veins the desire to express my music through this genre that I consider a vital part of my music background.

BR- Is there still any particular music style you intend to explore in the years to come?

AV - I am very intrigued by new sound coming from Japan, lately. It's a type of music with tone intervals which are slightly different from our European one. Perhaps I may try and experiment that type of music in the next future, who knows?

BR- Should you be asked to choose a track or a record which defines the inner Adriano Viterbini, for which record would you go for?

AV - There is a track called Scrapyard Lullaby from Chris Whitley that maybe defines myself, played with a Dobro, halfway between the old-school-Robert Johnson-type and more contemporary one; it's me all along in that track... just listen to it and you will understand!

Giovanni "Gio" Pilato is Italian music writer, who has been living in UK since 2002. With an enormous passion for music, and life in general, his interest in the communications began at 11 years old. He worked briefly for local radios in his youth and did a one-off radio show on 2007 on the glorious BBC 6 Music Radio station. Gio started his freelance journalist career in 2012, with Italian artists, and is now focusing on blues artists mainly.

An Interview With Jonny Lang