Details
Written by Bluebird
Published: May 17 2014

Page is Commencement Speaker at Berklee

May 10, 2014 was a Celebration Day for the Berklee College of Music in Boston. Jimmy Page, Geri Allen, Valerie Simpson, and Thara Memory received Honorary Doctor of Music degrees as presented by Roger H. Brown, Berklee President.

Led Zeppelin's Jimmy Page, now Dr.James Patrick Page, was the key note speaker to graduates at the Agganis Arena. The private Baccalaureate ceremony, open to only graduates and their families. was held to bestow degrees such as professional music, music business management and performance. 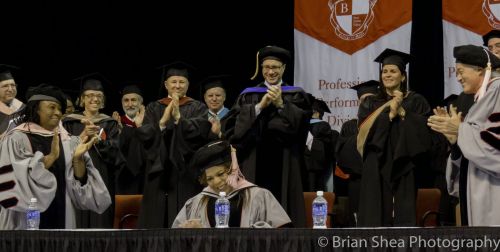 On commencement eve, it is the Berklee tradition for the students to pay tribute to the honorees by performing music associated with their careers at the Agganis. This concert was also closed to the public.

Jackie Beard, Professor of Woodwinds, marshaled. The procession of the commencement ceremony on Saturday morning brought a hush of reverence, followed by applause and excitement, as the students came into the arena, and the honorees were marshaled to the stage. There was full participation and response, from the students, families and honorees alike, in raising the inspiration for music to its highest levels.

The event was called to order by Provost, Lawrence J. Simpson, with commencement greetings by Board of Trustees, Jeff Shames. Jackie Beard sent greetings from the faculty.

Tenor saxophonist, Drew Krasner, from Harrisburg, PA gave a powerful speech to the Berklee community.  Encompassing the inspiration of music, he empowered Berklee graduates with the social responsibility to be teachers and advocates of the arts. Krasner blended the ethereal impact of music with the reality of its financial returns, and encouraged his peers to help others "find their own 'music, whatever that may be." Here are some excerpts from his speech:

It is what I call euphoric release. The birds chirp louder on the first warm day of spring after a hard winter. The mother feels this when she first holds her newborn child. Travelers feel this when they step foot in a land they have only experienced in their dreams, and it is what we all share as our driving force within the medium of music. This unique ability we possess both to have and transfer deep emotion is something we cannot take for granted.

As the world's facilitators of music, in one capacity or another, you are a teacher and an advocate for the arts. Carry yourself in a manner that respects this notion, because in many places worldwide, the arts are being considered an afterthought. It is the small things that we do as individuals that will help turn this trend, and it requires every one of us to be in tune with this goal.

At the end of the day, we always come back to that feeling—the feeling at the peak of musical ecstasy when we are so enveloped in bliss that we lose our sense of self. We all know this moment intimately, yet its multitude of forms makes it elusive and unique; still, it keeps us coming back for more and more. Our music and our lives are one interconnected experience. If we are happy, our music is happy; if we are confused, our music is confused. This is a special human and spiritual relationship, which empowers musicians and non musicians alike to live rich and connected lives.

"Absolutely so elating! To feel all of the energy coming from you graduates. Congratulations to you and the families as well. " Jimmy Page.

Page took the stage with a friendly giggle and his gentleman's British accent saying, "Well, Good Morning, I had to check my watch there to make sure it was the morning." He quickly relaxed the crowd who laughed along with him.

It was the student tribute performance that Page noted as the inspiration for his commencement speech. He was so impressed with the concert from the students the night before, that he put aside his prepared talk as "rendered useless," in order to share the true moment with the Berklee community. He humbly called himself a "busking musician, trying to busk my speech."

"The quality of the musicianship last night was really moving, right across the whole of the different genres that were being played and thank you so much for the interpretation of my music, that was really touching."

His review of Valerie Simpson's performance as "superb," brought cheers from the crowd. He was also impressed with the brass sections, "so powerful, so precise and so punchy - and everything about what a good brass section should be about - fantastic soloist there - it was just moving across from the whole of the evening's event."

Page was honest with the audience about being a self-taught session musician who learned from listening to records of his own guitar heroes. He could not read music, but could read the chord charts. Page acknowledged that he had to know "quite a wide variety of music," a full range of styles, instruments and fields. He talked about not being "the stylist in your own sort of field" but he had to have techniques "evolve."

Acoustic, folk picking, and slide guitar, were among the many skills he had to learn on his own to be able to fit in with any band assigned during his session work. He shared with students seriously, about how it was a "closed shop" in session music back then, and how you had to have "discipline" to play, because if you made even one mistake, "you wouldn't be seen again." The two and a half year studio role exposed Page to TV jingles, movie soundtracks such as Goldfinger, The Kinks among other projects, all of which Page indicates was "wonderful and colorful."

He shared with the audience that one day, the notes were passed out and he had to learn to read music in a very serious way to keep up with competitors. He closed his talk with reverence and honor to the students and their families for their diligence to music and inspirations along the way.

Probably one of the most poignant and entertaining speeches of the day was that of Roger H. Brown, the Berklee President. His words of wit, wisdom and classic rock history, had even our media expert/web photographer, Brian Shea, chuckling behind his Google Glass.

When Page accepted the degree, he shared the heartwarming feeling of being "overwhelmed:"

...the illustrious company of the honorees [due to the] sheer depth and perfunctory of their music. Music has so much power, across so many avenues, to be in a position, where you have have done the thing which you are pretty much best at, which is making music, and bringing joy and pleasure to people, it can't be really much better.

Congratulations on your degrees and all the successes of the future.
(Jimmy Page, Berklee, May 10, 2014).

Visit our G+ page for a video of the pictures from the day.

Biographies provided by the Berklee College of Music

The first recipient of the Soul Train Lady of Soul Award for jazz, Allen was also the first woman and youngest ever recipient of the Danish Jazzpar Prize. Her work has been featured in the Peabody-winning film Beah: A Black Woman Speaks, on Carrington's Grammy-winning album The Mosaic Project, and Andy Bey's Grammy-nominated album American Song.

She was recently commissioned by the New Jersey Symphony Orchestra to compose a piece to commemorate the 50th anniversary of Dr. Martin Luther King Jr.'s "I Have a Dream" speech. In 2013, Allen returned to her alma mater, the University of Pittsburgh, to serve as Director of Jazz Studies.

She continues to tour with the Geri Allen Trio and her tap quartet, Timeline.

If you "Wanna Be Startin' Somethin'" visit the Motemamusic Channel for her jazz piano rendition of Michael Jackson's classic.

Valerie Simpson is half of the songwriting, production, and performing entity formerly known as Ashford and Simpson. With her late husband Nick Ashford, she co-wrote and produced numerous pop and soul hits for music legends such as Diana Ross, Marvin Gaye, Whitney Houston, and Chaka Khan, including "Ain't No Mountain High Enough," "You're All I Need to Get By," "Reach Out and Touch (Somebody's Hand)," and "I'm Every Woman," to name just a few.

As performers, Ashford and Simpson's best known songs include "Solid (As a Rock)" and "Found a Cure." The duo was inducted into the Songwriters Hall of Fame in 2002. Simpson recently released her first solo album, 2012's Dinosaurs Are Coming Back, and was featured on Oprah's Next Chapter.

As a member of the ASCAP Foundation Board, she established the Reach Out and Touch Award, which honors Ashford and helps advance the careers of promising young songwriters. She also owns and runs the Sugar Bar, a popular restaurant and music venue on New York's Upper West Side. Four Ashford and Simpson songs are currently featured in the Broadway hit Motown the Musical. Valerie's website announces her new record.

Motown writer and drummer, Drew Schultz, will be publishing an extensive article on Valerie Simpson in another post.

Thara Memory is a trumpeter, composer, and teacher who has earned the reputation as one of the finest musicians and music educators in Portland, Oregon, his home for over 40 years. Born in Tampa and raised in Eatonville, Florida, he has played with Dizzy Gillespie, James Brown, Natalie Cole, the Four Tops, and Stanley Turrentine, among others.

In 2005, he founded the American Music Program, a youth jazz orchestra that has won national accolades. He shares a 2013 Grammy Award with his former student, Berklee alumna Esperanza Spalding, for his arrangement of the track "City of Roses" from her album Radio Music Society. Students from the American Music Program back Spalding on the track and also appear in the song's music video.

Memory was named the Jazz Society of Oregon's Musician of the Year in 2006, inducted into the Oregon Music Hall of Fame in 2007, and was honored as Portland Jazz Master at the 2012 Portland Jazz Festival.

Listen to Thara Memory's jazz productions via his website, www.tharamemory.com .

More photos of this event can be seen on Facebook and Google+.