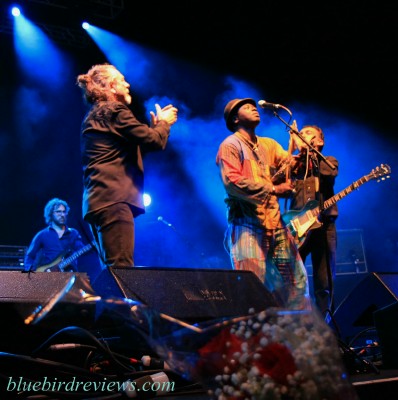 "I just can't wait for this record ... When I was expecting for a North African, more exotic trip, Robert goes back home, to his celtic roots ... I love this soooooo much!" (Adriana, BBR Facebook Page).

"It takes me back to his Fate of Nations days. Really haunting but good." (Michelle, Led Zeppelin Ultimate Fan Page).

Readers and listeners worldwide are in a buzz of discussion about Robert Plant's new single, "Rainbow." This song is the first release from the highly anticipated record, lullaby and... The Ceaseless Roar. Nonesuch Records will publish the album in September, 2014. Some fans immediately recognized Plant's honorable return to his Celtic roots, Dreamland or the Fate of Nations sounds. Plant himself, acknowledged revisiting the "boundaries" of the roots from whence he's come. Listen to the newly published track here:

Plant gave followers a lovely walk through his homeland of comfort and inspiration with the album preview video. The breathtaking footage of the farms and fields not only was reminiscient of Plant's roots, but for readers, was also of his dear friend, John Henry Bonham. In the press release for the record, Plant does mention a "Zeppelin" feel to the record: