My first listen to this band was live, when they opened for the Spin Doctors at Pearl Street in Northampton, MA this May (2012). This group of musicians were loud, proud and dynamic. Bigger than life, they made the small club stage flash into arena rock. I knew nothing about them when I first caught their show, but after I saw them, I started asking my music friends and colleagues, 'Do You Know Doug Ratner?' Their performance energy was the height of AC/DC. The tradition of nuance and originality, spiced with a rebellious spirit, was that of the Who. And the impact of their show was definitely quality classic rock.
Hearing Lessons Well Learned, and watching them on video however, brings to mind a more punk style and influence. On researching this band, their sense of social justice and willingness to get into some trouble to get people to stop and pay attention to their points, brings their work to a whole different level. They are not just singing about teenage love and heartache, they are speaking to the lives of youth on a broader, yet deeper, scale. Taking on topics such as bullying, rage and societal destruction, their music message is positioned to be startling.
Do You Know Doug Ratner? 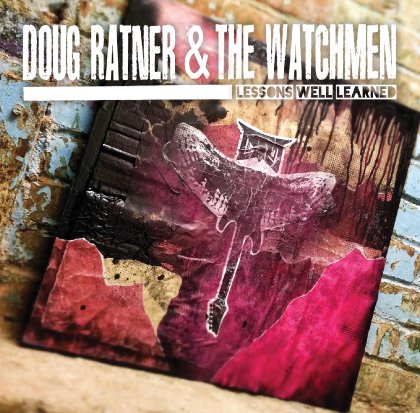 Meet Doug Ratner and The Watchmen-
Doug Ratner- Vocals, lead and rhythm guitar
Mark Adamski- Lead and rhythm guitar
Austin Seabury- Bass
Jimmy Farquhar- Drums
EP: Lessons Well Learned
1. Bomb in the Backseat- This catchy, guitar soaked anthem, aims to wake up the masses. Musically, it is in your face punk, much like the tradition of the Ramones or The Clash. Lyrically, it projects what would happen if a youth's anger went totally unchecked in today's world, where dangerous information, as well as useless information and greed, are transmitted into a perfect storm. Simultaneously, banned from public access TV, while climbing the charts on Amazon and rock radio, "Bomb in the Backseat" has caught on to listeners with hooks and undeniable force.
2. Money- Pink Floyd's well known classic is sped up with a contemporary twist, keeping with the theme of the EP's highlight of greed and stash collecting selfishness. The live version of this cover rocks!
3. Ghost In The Mirror- Anti-bullying websites and youth support groups have embraced this song because it traces the thoughts that someone in a power down position may feel when humiliated by peer alienation. The attempts to change yourself to mediate this often do fail, because then you are further way from who you really are, making the experiences even worse. The ghost is understood and brought to a, "day in the human life," of a teenager. The song is comforting, with its acoustic and subtle bass lines, back up harmonies, it reaches out.
Paul Westerberg,  Lou Reed, are you listening? Do You know Doug Ratner?
4. Do You Remember? This was one of my favorite recorded tracks on this EP. The upbeat harmonies and shuffle along rhythms make it fun. The British rock bands did well by crossing genres within their own records, this is what album rock is all about.
5. Take Me Home-  Starting out with a super hero rhythm, grinding guitar, running bass lines and slamming drums, the closing track on this EP makes you want more from this band. Hearing this live was great and there seemed to be some raw Van Halen spirit going on, from my view at the club. Doug Ratner and The Watchmen are creative, bold and don't hold back when they think out loud.
These rebel yellers are bad angst and use their talented energy to carry their message to the masses. Yet, to speak to each of them personally, you understand the intellect behind their every move and the way they've thought out the influence of their music. Ratner is a true leader in communication, with great positive correspondence, questions answered thoroughly, the whole band shows appreciation to their fans and those around them, including other bands. The gentlemen Watchmen are knocking at the doors of the thoughts of youth and blaring through the windows to get their music heard.
Are you listening?
Do you know Doug Ratner? Do you know the Watchmen?
Band Stated Influences~
The Who, Pearl Jam, CCR, The Police, The Allman Brothers, Green Day, Neil Young, Tom Petty, G&R, State
From Their Biography~
Doug Ratner & The Watchmen, or DRAW, are without a doubt the most exciting down & dirty rock n' roll bands to emerge on the New England music scene in a while. With the release of their newest EP, “Lessons Well Learned” they have quickly become a force to be reckoned with.  Their single “Bomb in the Backseat” recently hit #2 on Amazon’s Hottest New Release in Classic Rock, and it was Radio 104.1 o...f Hartford’s most requested song of the week for 4/29. Not bad for a local band from Springfield, MA. Residing in a music scene dominated by folk music and jam rock, DRAW has disregarded the norm and blasted through the barriers to quickly become the biggest act in the region. Their rebellious nature even got them banned from a popular TV show in Springfield, MA. They tour all throughout New England and the East Coast, and recently landed an opening slot for the Spin Doctors in May, and the Smithereens in August. These guys sense that there is a lack of rock n’ roll in the current music scene and plan to do something about it. They created a concept EP that focuses on strong societal issues such as bullying, depression, technological dependence, greed, and gender roles. By weaving in these themes into their music, they have begun to attempt a revival in rock music that harkens back to the late 60’s and early 70’s. “Rock n’ roll takes all the chances it needs in order to make a difference in this world. Icons such as Little Richard, Jimi Hendrix, The Stones, and GNR knew that in order to make a change, you have to be honest and sincere with your message to the world. That’s what we are doing right now. Rock n’ roll changed my life and it has molded me into the person I am. It’s lying dormant somewhere in society and needs a jolt of energy into this world.” Doug Ratner, "Rock n’ roll will survive!"
Support your favorite musicians through buying their music.
Find Doug Ratner and The Watchmen's EP here: Doug Ratner and The Watchmen
Bluebirdreviews is on Facebook!