Doug Ratner: Run With Me 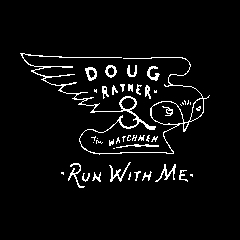 Doug Ratner and The Watchmen are a rock band from Springfield, MA. This part of Western New England home grows a wide range of diverse and talented musicians. With music hubs like Northampton and Amherst, plus its proximity to Boston and NYC, the Valley is a great crossroads of bands who take the winds from the mainstream, and cycle into their own direction.

We met Doug Ratner and The Watchmen last year when they opened for the historic return of the Spin Doctors to Pearl Street. The Spin Docs got their roots playing Pearl Street blues decades ago. They put on a great show, and Mr. Ratner sent me a hand written note with his full album for review, shortly after the performance.

The single from their last EP reached #2 on Amazon's Hottest New Release. Last year, the band had to do some political translating when they got kicked off of MassLive for being too controversial. Their song, "Bomb in the Backseat" which is actually a song against terrorism and bullying, was so edgy and in your face, that it was sometimes misunderstood. Still, The Smithereens and Spin Docs were just a few of the bands Ratner and The Watchmen have supported in the area, and the band marched on, gaining more strength for their causal message to create positive change with the power of music.

This year, by donating their song, "Dogs" DRAW are taking on animal rights activism to promote the adoption of senior dogs, while widening their tour circle and fan base. They also pays homage to the children lost in the Sandy Hook School shooting in Newtown, Connecticut. Ratner's underdog superhero status is a refreshing take on the power of rock and roll used for the good. Ratner has received a bit of flack for his early attempts to bypass authority and speak to the masses, but people are catching on to his message as he and The Watchmen keep on rolling.

"Run With Me" came out on August 15th, So this time, I wrote Mr. Ratner a note of my own, and told him I'd be happy to take on this second collection of original works for review.

Their press release states: For their second studio album, Doug Ratner and the Watchmen present with the influence of the Allman Brothers. DRAW delivers a refreshing take on old school rock to create their own new sound, Organic Rock. Songs like "If You Wanna", "American Dream", and "Piece of Mind" have influences of blues, country and garage rock, and display their excellent musicianship and Ratner's gritty and freedom-calling vocals.

As I went through the album, I had a few questions for Doug, and he was kind enough to answer:

BBR: Tell us more about your influences, especially on this record.

Doug Ratner: Believe it or not, I was listening to a lot of country music for this record. Ben Jon, our producer was really pushing/challenging me to create stronger lyrical content, more story telling, etc. And country music has amazing story telling, especially from a cd selling perspective. Regardless if you are into that genre or not, you can't deny the simplicity of it all and how well people connect to it. Artists like Eric Church, Miranda Lambert, and old honky tonk Stones (Exile on Main Street, Sticky Fingers) were big influences.

And for this record I wanted to capture a true "sonic image" that was unique to us. I wanted someone to pop the record in, or hear a song and say "That's that Doug Ratner sound!" So finding a way to fuse my love of the Allman Brothers, CCR, Petty, and Guns n Roses was a challenge, and a lot of that was done with Ben's help, and Justin, the engineer.

Doug Ratner: Rob, our bassist is a die hard Descendants fan, and we're both big Rancid fans. And Green day of course.

BBR: Of course! This all makes sense to me now!

Here is the review:

The lead track and video comes out kickin' with a straight shot of rock. A classic tune with the full bells and whistles of thunder drums, sharp guitar solos and rhythmic harmonies, Ratner bursts the bubble of the mundane for a fun, danceable song.

This made me ask about punk influences. Speed beats in your face, with a constant pace and soaring guitar. The Ramones? The Replacements? Ratner is more contemporary in his punk influences, Descendants, Rancid, Green Day. One of our writers thought Ratner sounded like Chixdiggit. Surprise, surprise, you keep us guessing, gentlemen.

We sailed this past our readers because they are compassionate people who love a good cause. This song highlights Ratner's love of dogs and his mission to contribute to the effort to increase adoption of senior dogs. The response was warm hearted and genuine. Great video, great song. Keep em howlin.

A Green Day sound with the drive of a funk punk machine. Maybe a humble version of the Red Hot Chili Peppers even comes to mind, as Ratner mixes up some great high energy rock and scrambles any idea of genre that you might be trying to call up to categorize this band. Any boxes built to fit Doug Ratner and The Watchmen will be left on the top of your car, only to fly mid-air and end up smashed on the street.

This had a lower tone and more serious lyrical theme. Dealing with the widespread unhappiness that American culture can create because of image consciousness and routine. Genuine personality expression going under the wire is something that seems like a binary choice to many people, rather than a natural process. Denying who you are to reach financial status robs you of the thing that is most valuable, your soul. Ratner challenges this throughout the album, using standard stereotypes and putting them on their end.

The lead guitar on this is classic rock all the way, with some country tones mixed in, reaching for Ratner's wild side image. Blues riffs and swaying rhythms that stop on a dime could leave the crowd hanging from the rafters at a live show. This will be an encore anthem.

Heartbreak and definitive choices are in the forefront of this song that could be pop in its repetitive lyrics and familiar structure. 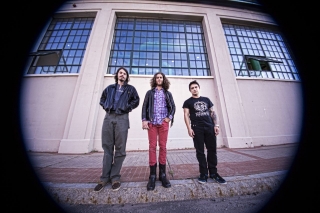 Ratner is not shy about defining his identity and he's consistent. A rebel of authority with a Robin Hood mission, Ratner has crafted a rock superhero persona, complete with a fashion statement that defies the mags. He visited local schools in our area on career day, encouraging kids to be themselves and stand up for creativity. Given that his rock career is in the early stages, this is a testament to Ratner's commitment to keep it real at all costs.

A metal edge from The Watchmen is a great surprise and shows the range of their talent. Again, it's Chili Peppers meets Green Day and the Piece of Mind title reminded me of old school Iron Maiden, so Ratner is pushing the boundaries of many a loud sound around here.

Old time rock and roll is the wind up punch to this fun and engaging album. I think steady speed, controlled vocals, with a rich bold texture are some signatures of Ratner's sound. The band is mighty fine to carry any arrangement of blues rock, country jam, funk punk and balladry to the masses.

Tour ballads are common among classic rockers. Jackson Browne has "Stay". Bob Seger bellows "Turn The Page". Ratner and The Watchmen are building their range of experiences, so these slow musings will become even more meaningful, as they are riddled with the heartland rock that rolls along the pavement, mile after mile.

There Will Be A Day

Ratner doesn't hold back when he casts his opinion about the Sandy Hook School shootings from Newtown, Connecticut - and this is a good thing. December 21, 2012, was one of the saddest days for our country. "Oh Lord, what have we become!" Ratner shouts out in grief of the innocent children who were forever lost on that day. But they will not be forgotten, even by those who've never met them. Their families have a slow road to healing and Ratner poses the responsibility for the rest of us to keep the question of solutions on the table, by highlighting this tragic event, with direct reference and respectful reverence.

Do you know Doug Ratner?

Read our other articles here:

Doug Ratner and The Watchmen