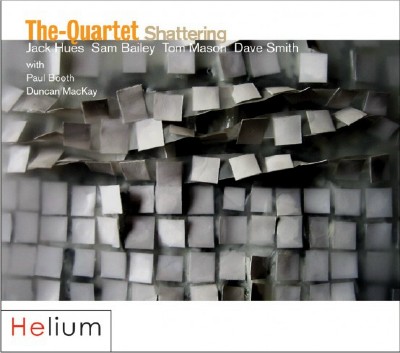 Like many things in life, if we are open to the journey of exploration, a deeper understanding of ourselves occurs, and more threads appear to be followed, weaving what we love into a personal tapestry. In a conversation with Jack Hues, we discussed projects that are outside of Wang Chung. Hues' interest in jazz has been long standing. Illuminated and Shattering are two gems in the jazz music catalogs of Hues and pianist Sam Bailey. In our interview, drummer, Dave Smith is described as 'heroic' in his mastery of genre eclectisism. The Quartet and special guests are equally entrancing, progressive and pull the listener into the story lines. They create molds, for the sole purpose of breaking them.

Enter: The Quartet with Shattering on Helium Records (2008).

Shattering is a concept album. Jazz instrumentals, percussion and special effects are placed in the composition, as poets place words on a page. Everything is purposeful. There is even musical 'white space'. A story is to be told, with an introduction to the setting, and then an unfolding or as the title describes, a 'shattering' of prior known frames. The repetition and expansion of key phrases throughout the album make it a musical score that has a movie like quality. You can picture it in your mind's eye as the scenes change the tone and pace, yet the works are connected. You can apply this composition to anything that might have cohesion in life, become disjointed or blown apart, and then reintegrate with a new meaning.

Jack Hues offers a wide expanse of very interesting guitar work, from jazz to straight out rock. He plays what is best for the songs, adding melodic interest in some centerpieces, then getting out of the way to highlight others. This is a true ensemble, with equally talented musicians offering the benefits of collaboration. Tom Mason brings solid bass lines to keep the edgy tracks in a listen-able format that eases it for the newcomers, yet builds excitement for the entire project. Sam Bailey plays signature Fender rhodes and piano, which blend, guide and cajole. He revisits themes, again and again, centering the listener, so they can be launched, and find their way home. "The Deacon's Tale" offers lovely piano solos that float toward quiet pondering, while the bass bellows the underscore.

Dave Smith's understated debut to the music world needs to be boldly announced at this point. We first saw Dave with Robert Plant and the Sensational Space Shifters (2013) and his mastery of the excitement of that night still echoes. His energy was previously captured on this recorded series with The Quartet. Whether an all out rock jam ensues in "The Check Out Girl," tom tom drum effects for "The wife of the councillor's tale," or he is providing subtle cymbal shining to Hues funky guitar in "Plains Rising," Dave Smith is a foreground, background, panoramic landscape that can do no wrong.

Saxophonist Paul Booth's pieces have traditional and free jazz influences. He jumps platforms to skillfully land on cue, settling the vast range of "Plains Rising." Duncan MacKay adds trumpet to fast paced "Dark Moon" duo tracks and "Lights Out," giving it a beautiful Saturday night cabaret feel, like something you'd hear in a Tom Waits performance, yet the modern edges do not try to be softened by any means.

Regardless of the type of music you routinely prefer, it is fascinating to witness how much control these talented artists wield in this sphere of composition and performing. When words place limits on music concepts, these are very dramatic pieces that evoke emotions, using music language to expand into the non-verbal of human experience. Make Shattering your own story as you listen.

Canterbury Tales: The Wife Of The Councillor's Tale

"Hues' and Bailey's take on the Canterbury Tales [are]- not Chaucer's (except in the titles), but the Canterbury jazz-rock scene of the 60s and 70s, and the psychedelic improv of Soft Machine." http://www.theguardian.com/music/2008/jun/13/jazz

If we are radio listeners, often our first introduction to an artists' music is through their most popular releases. Bluebirdreviews had the privilege to interview Jack Hues of 1980's super pop band, Wang Chung. Their 2013 record, "Tazer Up" is a unique fusion of Beatles influenced, mod fresh and hip tracks that show the band still has great hooks and these lyrics are observant, poetic and stunning. We discussed this, as well as the state of the music business these days.

In my usual routine rock snob sensibilities, I expressed dismay at some of the pop bands today. How I droned on! Pop bands are repetitive, dis-ingenuous and mass produced, while other solid artists are overlooked, I professed. Hues generally agreed, but then he reminded me, "Let's not get too negative ...It does require some talent to make a good record ..." I began to understand that this initial talent gives the creative seed for original songs, even if the markets take over after sales success.

I must admit, I was curious about the mind of famous pop singers. I wondered how they think about music on a personal level. To borrow a phrase from Wang Chung's new release, "Driving You." My theory is that with the bands who do their own song writing, it takes thought and creativity to diverge and converge into pieces which will be both expressive and meet the entertainment needs of the masses. If they are not record company robots, then how do they conceptualize a multi-million dollar record? These artists must know something about the public consciousness that we don't in order to generate world wide attention from their music. Even if hits are stumbled upon by accident, the collective unconsciousness has been tapped by the artist and that must reflect a superlative wisdom at some level. It's thinking on a global scale of what many listeners would crave at that moment in cultural time, to have echoed in their heads without them even knowing it. There must be original song writing, however, that to me, is key. Jack Hues confirms this in who he is a musician, pop hits or not, he never stops composing. The popular songs are just one facet of his artistic interest. Who would think that the author of "Everybody Wang Chung Tonight" would have an interest in artistic jazz records? Now it all makes sense.

How would the casual media audience know of music that spans the genres unless they did their own research? The benefit of these artists to speak to the indie press offers so much to the every day people of music. We were honored to discuss these issues and it uncovered an entirely new thread of music exploration that was unknown to us before the interview. Thank you, Jack Hues!

WANG CHUNG has a NEW RECORD: Tazer Up! Listen to "Let's Get Along"