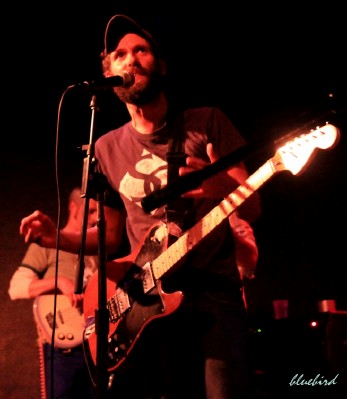 With many thanks to GTO for the lifetime of music.

Are you hearing soul riffs of James Brown, soliloquies of Van Morrison, sax, stories and energy of Bruce Springsteen? What about slow core, contemporary indie styles, like Nick Drake? Ray Lamontagne? Are you having connected Leonard Cohen experiences of life, in poetry? Within the same song? Well, then, sweet listener, you must be at a Jason Anderson show.

Did you rise from your seat, join the community of music dwellers and engage in moments you will never forget? Life changing moments that created the space for your thoughts to be freely validated, while your soul was fed by joyful sound? Well, then, wise person, you must have gone to a Jason Anderson show - and stayed ... until the end.

With honesty and integrity for every human being in the room, Jason Anderson reaches out to the individuals present and through their unspoken ideas, creates a music collective.  Jason Anderson's writing is poetic, sage and creative, but it also makes good common sense. He fights the doom of hesitation, preventing the questioning from taking over natural action.The reality comes in, "tonight, in the glow of the Coke machine."  ~Jason Anderson, Summer Style, "SSII."

"How you doing out there tonight?" he screamed. 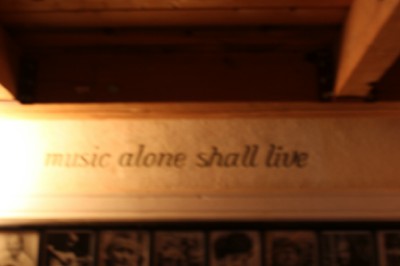 The first Jason Anderson song I heard was from The Hopeful and the Unafraid, the track entitled, "July 4, 2004." Since then, we've interviewed him for Bluebirdreviews, and ran an album review of Summer Style, which was released last year 2011. Video footage of Jason's engaging live show, made it clear that this was an artist not to be missed in concert. So when he came back through Western Mass after a long tour across the country, this Iron Horse date was a permanent find on our review calendar. Preparing for a show like this, musically, is straightforward, experiencing a Jason Anderson show, however, was entirely different.

Jason and The Best did a long sound check before the show. Every instrument in this five piece band had to be right. As friendly and laid back as he is with the audience, he is not haphazard in the production of his music. The recorded tracks reflect this, and the live show had just as much thoughtfulness and care going into it.

Quickly, as the show started, within the first song, "Nothin You Can Do," he did something that I've seen only on video in select places. He hung from the stage 'over' the crowd, then geared back and walked though the crowd. He reached out to every person in the room from word one.

The Best are serious musicians too. The tenor sax, Sean Wright, was hot all night and brought the house down with solos that channeled the late, great, Clarence Clemens. Traveling with his full band tonight, I'd hoped Jason would have done the song, "The Hopeful and The Unafraid," and he did. I heard the sax approach these notes during sound check and they came back around to do the entire song. It's an amazing tune. The catchy drums and immediate rhythm section, creates a dance party in an instant. Jason was calling out jokes to the crowd about what he was not drinking as the song goes on. He pointed out people in the upper levels to come down to the dance floor, 'everyone knows how to dance.' "We couldn't seem to shake that song." 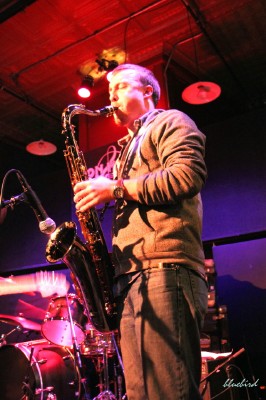 Calling out to the coolest and most sublime fan in the shadows, Jason is direct, yet welcoming. Balanced. Thanking the support band, Fiesta Brava for a great set, he was just getting started, "People, are you ready?" Did he mean to half-reference, the 1965 Impressions, "People get ready?" Some musicians have so much music in their heads, it just comes out in everything they say. Plus, with Jason Anderson, nothing seems to happen by accident.

Jumping on the stage, revving up the crowd, Jason introduced everyone included in the production of this show. Musicians, sound techs, staff, ticket agents up front, everyone was in gratitude tonight. After a high flying sax piece and an in your face guitar rhythm sequence, he quieted the crowd to hear the subtle tones in "Saturday Night," from his earlier work on the album, Tonight.

"You Better Watch Your Step" is a song about 'flirting,' said Jason. This is a BIG song, instrumentally, in my view. Will Bangs on lead guitar in this track, cuts right through you and it grinds you down to the core. The lyrics are about what you want to say, but just can't. So you don't, and that tension is what the song is about. It ended with a beautiful sax solo by Sean Wright. This song said everything it needed to say, engineered to take its time. Brilliant.

"With courage and clumsiness with bravery and stupidity."

"All the time in your soul between lost and regret."

Another track from Anderson's Tonight played was "On Vacation." Soft vocals, melodies and blended sax are artful enough, but again, it's the use of the spaces in between that makes this artist and band so powerful. If only we, as listeners, could be so patient, to wait for the true beauty and meaning of things to show themselves.

If you don't know the more obscure works of Van Morrison, such as Tir Na Nog, or Hyndford Street, or better yet, Take Me Back, they may be worth checking out. He bases his soul tracks on Celtic poetry and in many recordings, veers off the music path to use words, timing, phrasing and pauses to create poetic space with words and ideas. Jason does this process, philosophically, technically and exquisitely. He communicates art and poetic stanzas through impromptu repetition and also soliloquies within some songs. The way he repeats even just a few words at the end of a bridge, has the powerful effect of slowing down the air molecules in the room.

As prolific as he is, Jason snaps us to attention with upbeat, catchy tunes as well. By request, "This Will Never Be Our Town," hit the airwaves and brought in the crowd. Jason's short 'whooo-' is like James Brown's 'ha-'. So distinctive. I can't say enough about the band backing Jason tonight. Gregg Porter on drums was air tight and the timing meant everything in getting these songs to have impact. Jim Reynolds kept close watch on bass with rhythms that resembled the heartbeats that Jason sings about so freely.

"Shut the freeway down, no one's leaving." 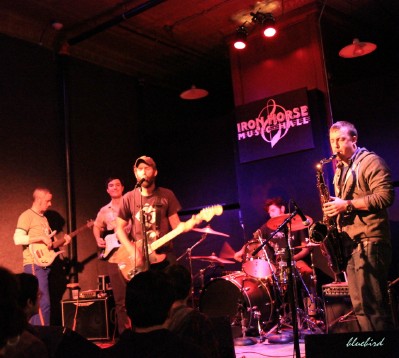 The magic happened somewhere between the end of this song and the escalation of the track called, "Labor Day." The tune was called and the crowd followed the piper, as close to the stage as we could get. The Iron Horse upstairs had been opened and people made their way downstairs, invited by Jason to be part of the moment. He told us, this was not about your problems, not about your job or anything that was going on outside of these walls, tonight, it was only about this moment that we can create right here, right now. Everyone was singing along, swaying, "No one's leaving ..."

"Gimme Some Lovin'" (The Spencer Davis Group, written by Steve Winwood, Spencer Davis and Muff Winwood) set the course to ultimate joy and if you couldn't keep pace with The Best, Jason taught you how. Like blues and soul masters of generations before him, the call and response pattern in music is the spirit of the ages that has literally and historically, saved lives (Delta Blues, Ted Gioa). Hypnotic and entranced, Jason pulled out all the stops to blare the opening riffs of "July 4, 2004." I looked at my friend who had traveled from NYC just to see this particular show and said, "That's it - we're not going to come back from this." 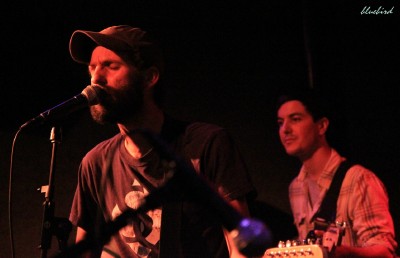 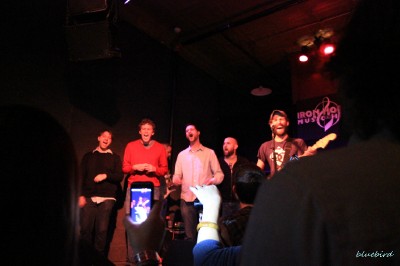 He introduced the band, several times, and was very personal in his presentation of the music to make sure the songs reflected the region. This was a type of homecoming for him, because he has been on tour, coast to coast and returning to New England on this last date had the meaning of coming to the source.

One more song? A medley of funny vocals reflected the surrounding towns, Palmer, Ware, great stuff. Fiesta Brava came onto the stage and joined them. What fun and they started the last chorus, "The best thing in the world is to love someone and they love you back."

There were signs posted on the stage, saying something. I'd seen this before in Jason's photo gallery, people spelling out names of things, including his, and then looking closely, we could see, the band had held up signs saying, "Will You Marry Me?" A marriage proposal from Will Bangs to his girlfriend, right there from the stage! Right in front of our eyes! (She said YES!)

Jason, who bases many of his songs on personal experiences, or life experiences that he observes, told us some of their story. He said they were friends for a long time and never crossed the line to tell each other how they felt, but everyone else knew they should be together. So a friend sat Will down and said, you know she is good for you and you are good for her " ... don't be a dumbass ... " 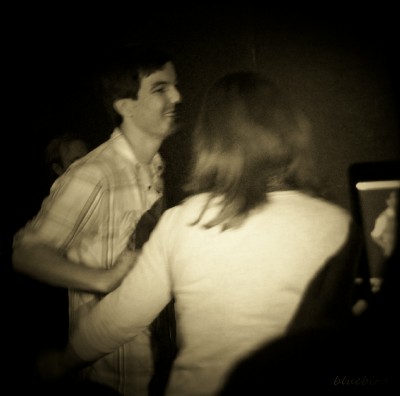 Setlist:
Nothin' You Can Do
The Hopeful and the Unafraid
Saturday Night
Watch Your Step
On Vacation
This Will Never Be Our Town
Labor Day
Gimme Some Lovin'
July 4, 2004
So Long
Higher and Higher

Jason told me after the show he was going to play SSI at the end, but the celebratory nature of the engagement had the band playing Higher and Higher instead. Take a listen to Summer Style, SSI, it is a beautiful work and a subtle tribute to Northampton, MA, as well as a gentle hint of connection in the unspoken. Listen to his voice crack at the first 'follow you' and how the guitar builds to such intensity.