I had the opportunity and pleasure of seeing U2 for the very first time on October 9, 2009 in Tampa, Florida. This was U2’s only stop in Florida, so people from all over the state traveled to see the show. I had heard prior to attending this concert that the band spends a fortune on the stage setting, sound, and lighting for every show and tour. However, I did not imagine

The stage was set with one side honoring New York and the other depicting London. The show began with references to God Save the Queen for Elton John and Yankee Doodle Dandy to bring in Billy Joel.

The crowd was excited for their arrival. Two pianos face each other and they took the stage, playing each others songs, trading solo voices and piano pieces. Your Song, Just The Way You Are, Don't Let The Sun Go Down on Me (clad with yellow lights, and timed for the pending sunset. 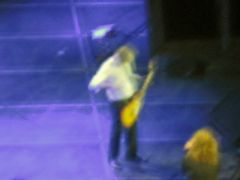 A breezy summer night set the mood for this flawless show. Beachballs, flip flops, lawn chairs and friendly folks from all generations came together to enjoy this double bill of equally powerful rockers, Tom Petty and Steve Winwood.