Mexican Americana and the rise of the donkey jawbone.

The Boston Music Awards is an exciting event that has been running for over 25 years. It was at the Liberty Hotel and the magnificent venue encapsulated a wide range of great artists that night. For complete coverage and venue photos click here. 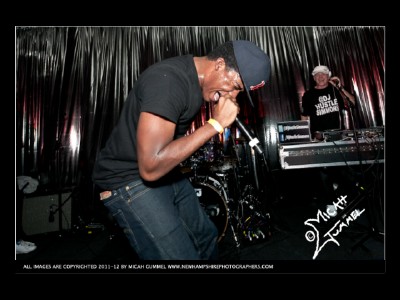 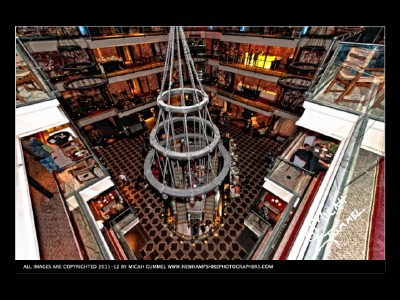 While researching the local bands on the nominee list, Moufy was an artist that stood out to me among the other nominated greats in rap and hip hop. I just loved his sound and energetic spirit.  I have been following rap since it started with Sylvia Robinson's label on Sugar Hill and genuinely mourned her death this year. With the history of rap and hip hop still ringing in my head, I was aware that this young artist came from a region that was not well known for this form of music. However, listening to Moufy gave me hope that the sound which had made its way through the urban streets for decades would continue to be true to the roots, because he puts his own spin on it, which ironically, brought it all back to the start. 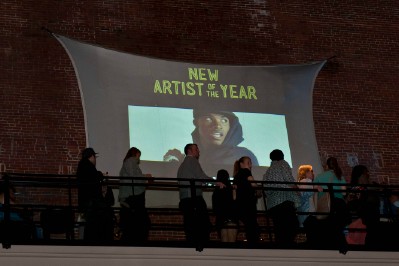 We watched the announcement of the awards and the experience was like witnessing the ball drop in Times Square. The excitement built up and the Moufy win brought cheers throughout the swank brick hotel that collected music lovers from all over New England. Once the announcements were done we ran to catch this rising star.

While waiting for Moufy to arrive, DJ Hustle Simmons was set up with old school funk and disco. Stevie Wonder's, Sir Duke, Earth, Wind and Fire's, Got To Get You Into My Life, Prince's Wanna Be Your Lover. Deep house music from the 1980's blared a familiar mix of club music and ended with Rob Base and DJ EZ Rock, Michael Jackson, tunes that kept people moving and targeted a wide range of ages in this crowd.

Jam'n 94.5 Boston announced Moufy and plugged their show 'The Launch Pad'. Moufy was gracious and then tore into all Boston related songs as a celebration for tonight. Twist It and Light It, Throw My 3's, Boston Lights and more.

The Liberty Room was packed. Moufy mixed with the crowd with non-stop energy that was infectious. We sung the lyrics to the point where you could barely hear Moufy himself. He was down and serious with getting his message of loyalty to New England and Boston. He raised us up to join together in unity as New England-ers. It was a wild party with positive vibes that did not stop. Most importantly, as serious as he is about the message, he smiles and emits that he just loves this music to the core. I can't imagine him doing anything else, he was completely in the zone. I sent his music to my writer friend Stephanie Hussey and she said the best line of "We In The Building" is 'It just feels so good to be us!'

At age 20, this man is just looking at the start of his career. My hope for him is that he keeps on track with what he is doing best, bringing people together with regional music that obviously means a lot to him. Lyrics that reflect the stories that are important to life. Music is the universal language that unites us and artists who reach for the higher ground will find it, as long as they don't give it up to the hype. 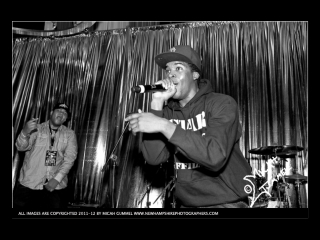 The Goo Goo Dolls rocked the Hampton Beach Casino at the beginning of this summer to a sold-out crowd. On November 19, 2011, they returned with Ryan Star to once again, perform to a sold-out show. This time it was the last of over 300 performances on the tour, and the last show for the Casino as it closed out its fantastic season of music.

Yngwie Malmsteen is credited for aiding the establishment of neoclassical metal, so named because of the influence of classical music on the genre.  It’s safe to say that Yngwie Malmsteen’s first album, 1984’s “Rising Force”, ensured Malmsteen’s place in the pantheon of rock guitarists.  This classical music influence manifests itself in very fast, highly technical guitar playing, eventually becoming closely related to what many now refer to as “shredding”. Put another way, achieve a 1,000 note streak in “Guitar Hero 2” and you’ll win yourself the Yngwie Malmsteen award.

Joe Bonamassa descended on the Wang this Thursday playing to a crowd of 3,000. This self made Blues Titan stayed close to his roots, yet soared through the roof with classic and electric blues. Just a day before taping a live DVD of his solo work, he performed a wide range of songs from his deep catalog, including the recent release, Dust Bowl. He started off sleek and fantastic, building a show that ended with sporting a Bruins jersey and jamming ZZ Top and Zeppelin. Fans who had seen him several times told us after the show that this was one of his best performances. He was completely on his mark.